除了…以外 (chúle…yǐwài) in Chinese grammar: apart from, except, in addition

除了…以外 (chúle…yǐwài) is often considered one of the core, ‘basic’ patterns in Chinese grammar. It's included in pretty much every Chinese textbook and course. That's because it's really common and really useful! You can use it to express “apart from”, “except” and “addition to”. For the main part of this structure, you just put the exception or addition in between 除了 and 以外:

That can then be used to express “apart from something” or “in addition to something”, depending on what comes after it in the sentence. Let's have a look at each one in turn.

This may be the most common use of 除了…以外. You use the structure described above, and follow it with 都:

You can use this to express anything along the lines of “apart from A, B all…” in English. Have a look at some example sentences:

Apart from Xiao Li, all the students answered incorrectly.

I understand all of it except for this word.

Apart from fried rice, she can't cook anything at all.

To express “in addition” or “as well as”, all you do is change the adverb that comes after 除了…以外. This time, you use 还 or 也. Have a look at some example sentences:

As well as coffee, I also like to drink tea.

In addition to my salary, I also have some other sources of income.

Notice how you could actually translate these sentences using “apart from” in English. The point is that the function is different in this second set of sentences. They're inclusive, whereas the first set above are exclusive.

This can be a source of confusion for people learning Chinese. Just remember that 除了…以外 can be used to exclude things (“apart from”) or include things (“in addition to”). It's very versatile!

The next thing to note about 除了…以外 is that one half of it is often left out. So you'll often see or hear sentences with just 除了 or just 以外, and not both. The structure is still the same, it's just that one part has been skipped out.

Have a look at some example sentences:

As well as France, we'd also like to go Spain.

Apart from Spring Festival, what other holidays does China have?

Apart from the Milky Way, what other galaxies are there?

There are seven more planets in the Solar System besides Earth.

That turned a bit astronomical for some reason! And before anyone complains about the accuracy of that last sentence: Pluto is not a planet! Anyway, just remember that either 除了 or 以外 can often be omitted from a sentence.

We described the different functions of 除了…以外 (inclusive and exclusive) above, and you might have noticed that the important difference is the adverb that comes afterwards. In other words, what the sentence means centres around that adverb!

With that in mind, let's have a look at four different adverbs that you might use after 除了…以外. Three of them were already covered above, but it can't hurt to get some more example sentences for them!

As mentioned above, using 都 after 除了…以外 makes it exclusive. 都 means “all”, so you're saying “apart from X, Y all…". Have a look at a couple more example sentences:

Apart from me, everyone has eaten.

Except for her, everyone was wearing jeans.

So, 都 makes a 除了…以外 sentence exclusive. It's equivalent to “except for” or “apart from” in English.

If you follow 除了…以外 with 还, it becomes inclusive. This is because 还 means “still” or “also”. You're saying “As well as X, Y _also _does something.” Have a look at some more example sentences:

As well as money, he also worries about his health.

As well as her husband, she also has a lover.

As well as ability, I also lack patience.

Hopefully you can now see how the adverb that comes after 除了…以外 determines whether it's inclusive or exclusive.

As well as 还, you can also use 也 to express inclusion*. Some examples:

He did nothing but complain.

As well as 还, you can also use 也 to express inclusion.

Don't worry if that sentence is a bit tricky though, we just included it for those who might be curious.

Finally, you can also use 又 with 除了…以外. This literally means “again” or “then”, but is often more like “also” in these sentences. Have a look at some examples:

Apart from the red wine I drank at home, I also had four beers.

Apart from lifting weights, I also went running for a while today.

Apart from this, there aren't any good options.

The above is more than enough to be able to understand things like “apart from” and “in addition” in Chinese. We even included some fairly difficult sentences for this level, just to keep you on your toes! If you're still in the mood for more advanced material, though, you might be interested in this different ‘versions’ of 除了…以外.

. It works exactly the same, it just sounds a bit more formal. Have a look at some example sentences, and don't worry if one or two of them seem quite hard at the moment. They'll seem easy if you keep studying!

As well as clothes, our factory also produces shoes.

Apart from you, I have nothing.

I have nothing to offer but blood, toil, tears and sweat.

That last sentence really is pretty difficult at this level, but you might find it interesting if you recognise the quote! 一无所有 is a set phrase meaning “to have nothing at all”. It's also the title of a famous Chinese rock song.

Finally, there's a formal set phrase: 除此之外. If you didn't know already, the character 此 is just a formal way of saying “this”. So this set phrase simply means “apart from this” or “in addition”. Note that you can't split this phrase up or insert other things into it.

除此之外 is often used in Chinese writing as a conjunction or connector. You say one point, then add a related one using 除此之外. It can also be used in everyday speech as a convenient way to say “besides…” Have a look at some examples:

I've got plenty more besides that.

There's no good way to do apart from this.

As well as that, I think her argument still has further flaws.

If you have any questions or suggestions, please share them in the comments below! We always like to get feedback.

Other articles for 了

Other articles for 以 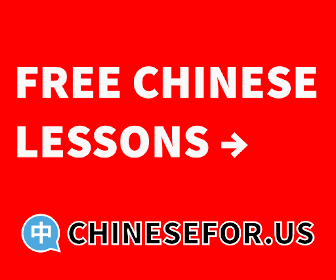